A downloadable visual novel for Windows and macOS

For the Extra Credits Game Jam 6, with the theme "Take Care".

A wholesome game about the bond of two siblings - raise Alex's comfort bar to make your sibling feel at ease with the use of the Internet.

The team was loosely inspired by the challenge Extra Translation, as our protagonist, Alex, will come up with ways to address their feelings about identity and sense of self. We also took inspiration in Extra Retro, as a big part of the game took the blue and pink MS-DOS palettes as inspiration.

The following is based on the True End path:

Visually, I liked the softer art of Alex's sprite and how it contrasted with the pixelated BGs: The former has an almost children's-book quality while I liked the retro colors and aesthetic of the latter. It was almost muted retrowave, like the game was invoking early DOS games, including the GUI. The art of Spongeblob made me chuckle; I'm pretty sure I used to draw that way too.

Story-wise, it felt like an educational game (in a good way!) to teach kids to use the Internet or older players (family, teachers) to guide kids into using computers. I don't know how old most kids are today when they start using a computer, but I don't find it implausible that they lack one or that Alex hasn't used one since the MC presumably doesn't have money to spare. It also felt as though the game might be set earlier than the present, when computers/the Internet wasn't as common; that impression might be due to the retro graphics, but the MC mentions that the computer is one that 'every spoiled kid' would love, implying that computers are an expensive luxury rather than relatively affordable/attainable.

I think the game could benefit from a line or two explaining the characters' living situation: While it didn't detract from my experience I was confused as to where and how the MC and their sibling were living, especially since the entire beginning is about how they're estranged from their parents. Aside from the parents gifting Alex a computer, it seemed a little extraneous to the rest of the story. I was surprised that they went to an Internet cafe, but this might be regional: Where I live it's common for people without computers/the Internet to use library computers since Internet cafes are less common and cost money, but it might be otherwise elsewhere.

It was obvious how much the MC cares for their sibling and that they have a strong relationship. I appreciate that you had a variety of answers/attitudes as  responses and that the final choice didn't have a "perfect" option; I liked Alex's willingness to speak up for themselves, presumably because trust was at max. Alex's friend being nonbinary and Alex potentially being nonbinary was straightforward without being heavy-handed and I liked that Alex was able to relate to the concept through Squareblob, similar to the way many young children learn about complex ideas. It felt a little nostalgic, as an older sibling, and I agree with the idea that that young children need guidance to use the Internet safely: Children absorb ideas quickly and don't always know which are good or healthy, so letting them onto the 'Net without initial supervision could lead to learning and internalizing harmful ideas. Being able to help Alex become more confident with a computer, and be a supportive sibling was genuinely heartwarming.

It did seem a little odd that you couldn't choose the gender of the viewpoint character, especially as the game is so careful about not using gender-specific pronouns for Alex. The game description doesn't mention that the MC is male and you only find out when Alex addresses you as "Big brother," so the ability to select your gender or some earlier indication that you're male would be nice. Overall I found the game charming, with a natural-feeling relationship between the siblings and and worthwhile messages that didn't get too heavy-handed. Sorry about typing so many words for a relatively short game, but you clearly put time and effort into this and it shows!

Thank you so much for such an in-depth review! You bring up really good points too! Our amazing writer, Leaf, had a really tough ballance to strike to make sure it never felt heavy-handed or unnatural. And all that in a really short time! I do personally feel there’s something poetic, or even meta, about not being able to choose your own gender as a player. Nobody gets to choose. We are who we are, even if we don’t always look the part right away. And it instinctively feels wrong when our idea of self doesn’t match how we are seen by others. Through games, we can experience this in all sorts of ways. And that, for me, is part of what makes games so powerful.

How has no one commented on this yet?

The game feels quite "polished" with all the menues, smooth transitions and saving/loading, although I guess RenPy have a lot of these things premade.

I am also surprised to the amount of text/story in the game, and then I probably didn't see everything (I got true ending).

Artwise, I think backgrounds are pixelated too much, level of pixelation of the main character is ideal. I guess the difference is because these were made by two different people. Also Alex looks cute, but the computer club background looks too contrasty/purple, not pleasing for eyes.

Story-wise, I think it feels very made-up and thus unrelatable:

With all the criticism, though, very good overall for a jam game:)

Hi! Glad you enjoyed our game, and thank you for taking the time to give us some constructive criticism: I'm the writer so I can try to make clearer a few of the things that got you confused:

- The premise is that Alex and the player live together because their parents do not tend for them - I originally intended to explain this more in-detail through the game (the explaination involved being given shelter by an understanding family relative and the player not being able to afford a computer for Alex but using some savings for a couple days to educate Alex on computers), but unfortunately we didn't have the time to make the story as lengthy as I would've wished!

- I'll admit my own point of view of the Internet is that it's definitely not a safe place for kids and that it's important to educate children to use it well and warn them against its potential dangers, so perhaps the paranoia you felt was my own haha

Regardless, you raised some very good points, which I'll definitely have to consider in my future endeavours.

Have a good day!

Thanks for the clarifications

> the player not being able to afford a computer for Alex but using some savings for a couple days to educate Alex on computers
I still think Alex shouldn't be getting computer from parents, because this breaks the logic. For example, I wouldn't go to VR club, if I were about to get VR headset myself, but I might go to VR club if I am not about to get one. And then they are poor, so they should be saving when possible.

> but unfortunately we didn't have the time to make the story as lengthy as I would've wished!
Yeah, time limits, I understand, I also had to cut a lot. Still, you did quite a lot of writing!

> and warn them against its potential dangers
I genuinely wonder if there is any research showing potential dangers of the internet for kids (besides social media addiction, depression, decreased attention span - things which apply to everyone, not just kids).

My opinion aside, if you want to raise such a concern and convey it, I think it should only be raised-from/expressed-by/feeled-by the main character and Alex should on the other hand be super chill, so you can create a contrast and so the main character can actually teach Alex something. For now, they are both on the same page to begin with and it seems unrealistic that Alex would have such concerns of Alex's own.

(Fun fact: I retyped she/her to Alex a couple times) 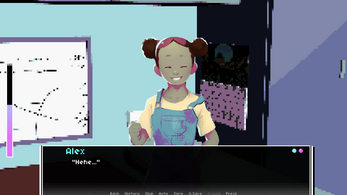 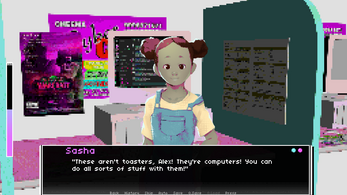